Bill and Karen Conrad own and operate New Media Gold a premier marketing agency. Along with training in WordPress, podcasting and streaming media, we specializing in new media and website platform integration for politician and entrepreneurs.

For additional show notes do to https://wp.me/p4xXkN-20z

In the first part of this episode of Timelines, we get caught up with Doug Lobdell, LTC USA (Ret) and the second half we go into how he along with his classmates captured the Navy goat and brought it to West Point.

On a technical site, this is the first time I have recorded a podcast using Facetime and ScreenFlow. 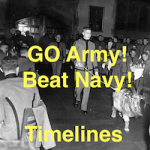 We dedicate this episode of Timelines to Maj Al Rupp, USMA 1955. As a West Point Rabble Rouser in his Second Class Year, he participated in capturing of the Navy goat, bringing it to West Point and parading the goat through Washington Hall the Sunday evening before the Army/Navy game. “It took an order from President Eisenhower to get West Point to return the goat before the game. As an officer in the US Air Force, he was selected in 1963 for the military astronaut program. In 1965 he was killed when his F-102 exploded.

The LIBRE Initiative® is a non-partisan, non-profit grassroots organization that advances the principles and values of economic freedom to empower the U.S. Hispanic community so it can thrive and contribute to a more prosperous America. This presentation was hosted by the Latin American Chamber of Business (LCAB) and Republican Men’s Club (RMC) of Northern Nevada at the Atlantis Casino, Reno, Nevada November 21, 2017. For more information go to http://thelibreinitiative.com/

National Association of Podcasters is Launched

This episode was recorded for WP-Tonic and covers a bit of history and the evolution of the National Association of Podcasters.

Join today the National Association of Podcasters at