Craig is up from Las Vegas and we are in the Peppermill Casino for this interview. Born in Las Vegas, he is a Native Nevadan. After high school, he headed to the east coast to enter the Naval Academy (Go Army! Beat Navy!) The Army-Navy Game has made a lasting impression on Craig.

Craig Mueller is a lifelong conservative, former naval officer, and veteran lawyer who has lived here in Las Vegas for over 40 years. He has two young children with his wife and business partner Cristina Hinds. After a long and successful legal career, Craig is seeking an opportunity to give back to the community that has allowed him to prosper through public service. He believes that as Attorney General, he will have as clients the citizens and constitution of the state of Nevada. Craig’s experience as an attorney is unrivaled in the race for Attorney General in Nevada. He served as deputy district attorney and for over two decades has run his own criminal defense firm with his wife Cristina. He has also represented several conservative causes in the courtroom. With over 25 years in the courtroom, Craig has personally run over 150 jury trials. He founded the DUI task force while in the District Attorney’s office. Just since announcing his candidacy this fall he has argued and won a unanimous decision in front of the 9th Circuit Court of Appeals in San Francisco. The Attorney General is charged with managing over 150 attorneys throughout the state handling all types of legal matters. The Attorney General is also responsible for ensuring that the all governmental organizations within the state are operating in compliance with the law and that the federal government does not overstep its authority within the state. Craig Mueller has a wealth of experience and a proven track record in all of these aspects. When you elect Craig Mueller Attorney General, you will have hired the best lawyer for the job. Craig grew up here in Las Vegas and returned after serving as an active duty naval officer as a Missile and Fire Control Officer in the Persian Gulf and as Deputy Project Manager at the Space and Naval Warfare Systems Command. In addition to the discipline and other character building experiences one tends to find in the military, Craig also gained experience managing large organizations from being directly responsible for over 140 sailors while on ships and later being responsible for the assignment of over 40,000 enlisted sailors and $14,000,000 budget as a personnel officer. During his time on active duty, Craig got his law degree from The University of Baltimore School of Law.

It is always a pleasure to interview people on Timelines but when it is my classmate it’s just plain fun. John’s and my paths have crossed many times since that first day we both raised our right hand July 7, 1976, and swore our oath of allegiance and entered the profession of arms. After graduating from West Point May 28, 1980, we both headed to Fort Benning to attend Infantry Officers Basic Course and winter Ranger School (white thread). In 1996 our paths would pass again as we both won our primaries to run for Congress. John would go on to win the general election in Illinois and I would lose in California.

Today, John is still in Congress and is the Chairman of the Subcommittee on Environment and Economy. His committee is addressing concerns regarding the management of the nation’s growing stockpile of nuclear waste.

As the Yucca Mountain Repository which is in Nevada continues to go through the licensing process, we expect to see a lot more of John out in our state.

2. Care about those who you serve

3. Have a mission goal and objectives 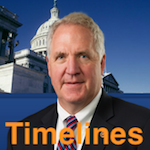 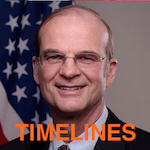 This is the first time we have a candidate for United State Senate on Timelines. On this episode, Thomas Heck, a 1977 Air Force Academy graduate, and retired Air Force officer is our guest. He says he’s had enough with Washington establishment career politicians, so he’s thrown his name into the hat for the United States Senate.  Now let’s get right into this episode and find out more about Tom Heck and why Nevadans should vote for him.